Radon is a naturally occurring chemical gas that results from the breakdown of radioactive materials. This process produces the colorless, odorless, and tasteless gas known as radon, which varies in quantity by location based on given geographical elements, such as the presence of a basement or crawl space in a building or certain types of ground water. Radon is found in every state in the U.S. and enters via cracks, holes or other spaces in your foundation or house or via well water. Radon that exists in the indoor air of a home is present primarily in the soil underneath the house. It is easy to breathe in and creates elevated levels of radiation in individuals, making it the second-leading cause of lung cancer in the U.S. as it causes over 20,000 lung cancer deaths in the U.S. each year.

Discovery of Radon in the U.S.

Radon came to the forefront as a major health concern in the U.S. in the mid-1980s after an incident at the Limerick Nuclear Power Plant in Pottstown, Pennsylvania. Employee Stanley Watras was arriving at work one day in 1984 when he passed through a detector that gauged the amount of radiation carried by workers. Upon triggering the alarms, Watras was reviewed by plant personnel who, because the plant was under construction, concluded that his home was the source of the radiation.

After evaluating the Watras’ home, they found radon levels of 2,700 pCi/L, or 700 times greater than recommended levels. Radon was entering the home from underground sources, exposing the family to high levels of carcinogens on a daily basis. Immediate mitigation steps were taken, which allowed state and federal officials to study radon and become more familiar with the hazardous effects of radon, including its linkage as the second-most cases of lung cancer nationwide.

With a radon reduction system in place that limited radon levels below the recommended 4 pCi/L limit, the Watras were able to return to and live in their home. Federal and state officials, in turn, began promoting public awareness of the dangers of radon and the steps available to address it.”

After smoking and asbestos, radon causes more cases of lung cancer among American than any other factor, with 15,000-22,000 deaths annually attributed to radon in the U.S. 10% of these deaths occur among nonsmokers, while those who smoke have a much greater risk of lung cancer and death.

Inhaled radon from indoor air harms your body over a period of time, as the gas decays in your lungs, leaving residual radioactive material that you inhale and damaging your lung tissue. This creates an increased risk of lung cancer, as does drinking water contaminated with radon. While most radon is airborne, consuming radon via drinking water can also lead to stomach cancer. The EPA estimates that over 160 people die annually from radon-laden drinking water, with nearly 90% of those cases stemming from lung cancer attributed to airborne radon that arose from water and the remaining deaths linked to stomach cancer cases arising from drinking radon via water.” 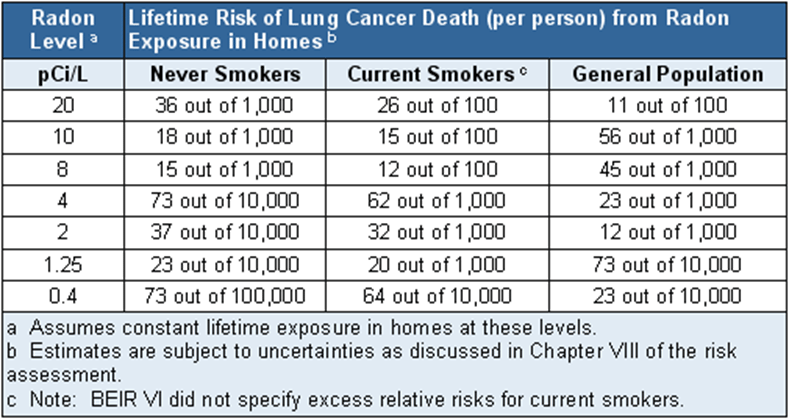 Due to the odorless, tasteless, and colorless nature of radon and the absence of short-term symptoms of radon exposure, testing is the only way to know the radon levels in your home or a home you are considering purchasing. An estimated eight million homes nationwide, or one in five homes, have increased levels of radon, with northern Illinois having one of the highest rates in the country.

Home testing is recommended by many state and federal organizations, including the U.S. EPA and Surgeon General, and the American Lung Association, American Medical Association, and National Safety Council. For testing services, residents of Illinois should contact a Licensed Radon Measurement Professional to conduct a test (he or she will perform the test in accordance with guidelines from the IEMA ((Illinois Emergency Management Agency)) and the Illinois Administrative Code ((Illinois Administrative Code)). 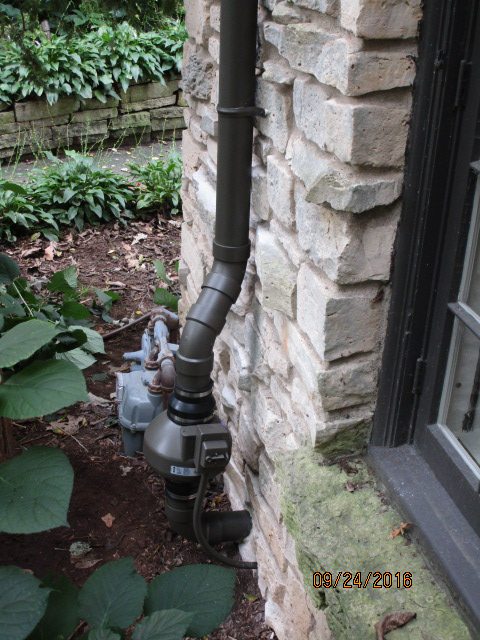 With the increase in radon awareness and testing among the general public since the 1980s, radon mitigation systems have increased in popularity and use. While state laws impacting real estate and radon have become more common, radon testing and mitigation are generally only required by local municipalities, if at all. Given this, and the fact that the U.S. EPA recommends the installation of a radon mitigation system if your home registers a minimum radon level of 4 pCi/L, most consumers must take mitigation steps of their own in the homes they own or are intending on purchasing in order to reduce the presence of radon.

The EPA has created mitigation guidelines to follow when addressing radon reduction, which focus on the installation of a fan and venting system to extract radon underneath the house and push it outside (also known as sub-slab depressurization, active soil depressurization, or soil suction). Simply sealing your home is not recommended by the EPA as a method of reducing radon, as it will not materially diminish the radon within. Exhaust systems are often used to remove radon from the indoor air, and some equipment removes radon from underneath your home and vents it out above the home to facilitate airborne dilution (an energy recovery system can also be used to diminish the energy lost to the outside during this process). Reducing radon in crawlspaces focuses on sub membrane suction, in which a plastic sheet covers the earth floor and a venting system is placed underneath the plastic sheet to pull the radon out and force it outside thru the vent pipe.

Most radon mitigation techniques apply active social depressurization due to its uniform use in most structures and the presence of radon beneath. Another method that is applied is mechanical ventilation, which reduces radon produced by objects inside a building. This entails eliminating air pressures in corners and walls where radon gathers (i.e. building supplies, concrete slabs, etc.). With an activated carbon system, radon is taken from water and grows over time (note that as of 2014, no regulations exist in the U.S. regarding disposal of radon treatment waste). Aeration mitigation systems release radon gas into the air from a water source, and could also be subject to environmental regulation at some point in the future.

When extracting radon from water sources, public utilities have taken steps in the past decade to begin treating for radon (however, as of 2014, private wells were not required to conduct such remediation). Radon is can be treated via aeration of the water or granular activated charcoal (GAR), prompting the radon to dissipate over time from water. While water radon removal can occur via the point of entry or use or a treatment plant, the equipment involved in this type of mitigation renders public systems the most advantageous.